In this chapter, we will learn how to compute monthly and annual turnover rates.

where \(Separations_{YearSumTotal}\) refers to the sum total of employee separations for the year, and \(Employees_{AverageAcrossMonths}\) refers to the average number of employees who were working across the 12 months in the year. Note that we multiply the initial fraction by 100 to convert the annual turnover rate from a proportion to a percentage.

This chapter’s tutorial demonstrates how to compute both monthly and annual turnover rates in R.

As usual, you have the choice to follow along with the written tutorial in this chapter or to watch the video tutorial below.

If you haven’t already, save the file called “turnover_rate.csv” into a folder that you will subsequently set as your working directory. Your working directory will likely be different than the one shown below (i.e., "H:/RWorkshop"). As a reminder, you can access all of the data files referenced in this book by downloading them as a compressed (zipped) folder from the my GitHub site: https://github.com/davidcaughlin/R-Tutorial-Data-Files; once you’ve followed the link to GitHub, just click “Code” (or “Download”) followed by “Download ZIP”, which will download all of the data files referenced in this book. For the sake of parsimony, I recommend downloading all of the data files into the same folder on your computer, which will allow you to set that same folder as your working directory for each of the chapters in this book.

Next, read in the .csv data file called “turnover_rate.csv” using your choice of read function. In this example, I use the read_csv function from the readr package (Wickham, Hester, and Bryan 2022). If you choose to use the read_csv function, be sure that you have installed and accessed the readr package using the install.packages and library functions. Note: You don’t need to install a package every time you wish to access it; in general, I would recommend updating a package installation once ever 1-3 months. For refreshers on installing packages and reading data into R, please refer to Packages and Reading Data into R.

When computing monthly turnover rates, we will create a new variable containing monthly turnover rates. To calculate the turnover rate for each month, we will use simple arithmetic by dividing the number of separations for the month divided by the average number of employees who worked in the organization that month; we can then multiply the resulting quotient by 100 to convert the proportion to a percentage. Because we are applying these arithmetic operations row by row (because in these data each row represents a unique month), our task will be relatively simple.

To illustrate how the underlying math and the logic of the operations, let’s break this process of computing monthly turnover rates into three steps. If you’re feeling confident and already understand the logic, you can skip directly to the third step, as that is what we’re building up to.

In our console, we should see a vector of the monthly turnover rates as proportions.

As the second step, if we wish to view the monthly turnover rates as percentages, we just need to multiply the quotient from above by 100. In the code below, I include parentheses around the chunk of code used to compute the proportions, as I think it’s easier to conceptualize what we’re doing. That being said, because we are working with division and multiplication here, mathematical orders of operation do not require the parentheses. It’s up to you whether you decide to include them.

In our console, we should see a vector of monthly turnover rates as percentages.

To verify that we accomplished what we set out to do, let’s print the tr data frame object using the print function from base R.

Optional: Given that we have access to an organization’s monthly turnover rates for an entire year, we can plot the turnover rates as a line graph to facilitate interpretation of trends. If you choose to create this optional data visualization, feel free to follow along; otherwise, you can skip down to the section called Compute Annual Turnover Rates. We will create a very simple plot using the aptly named plot function from base R. We will start with the most basic version of the line graph plot, and then add more arguments to refine it a bit. 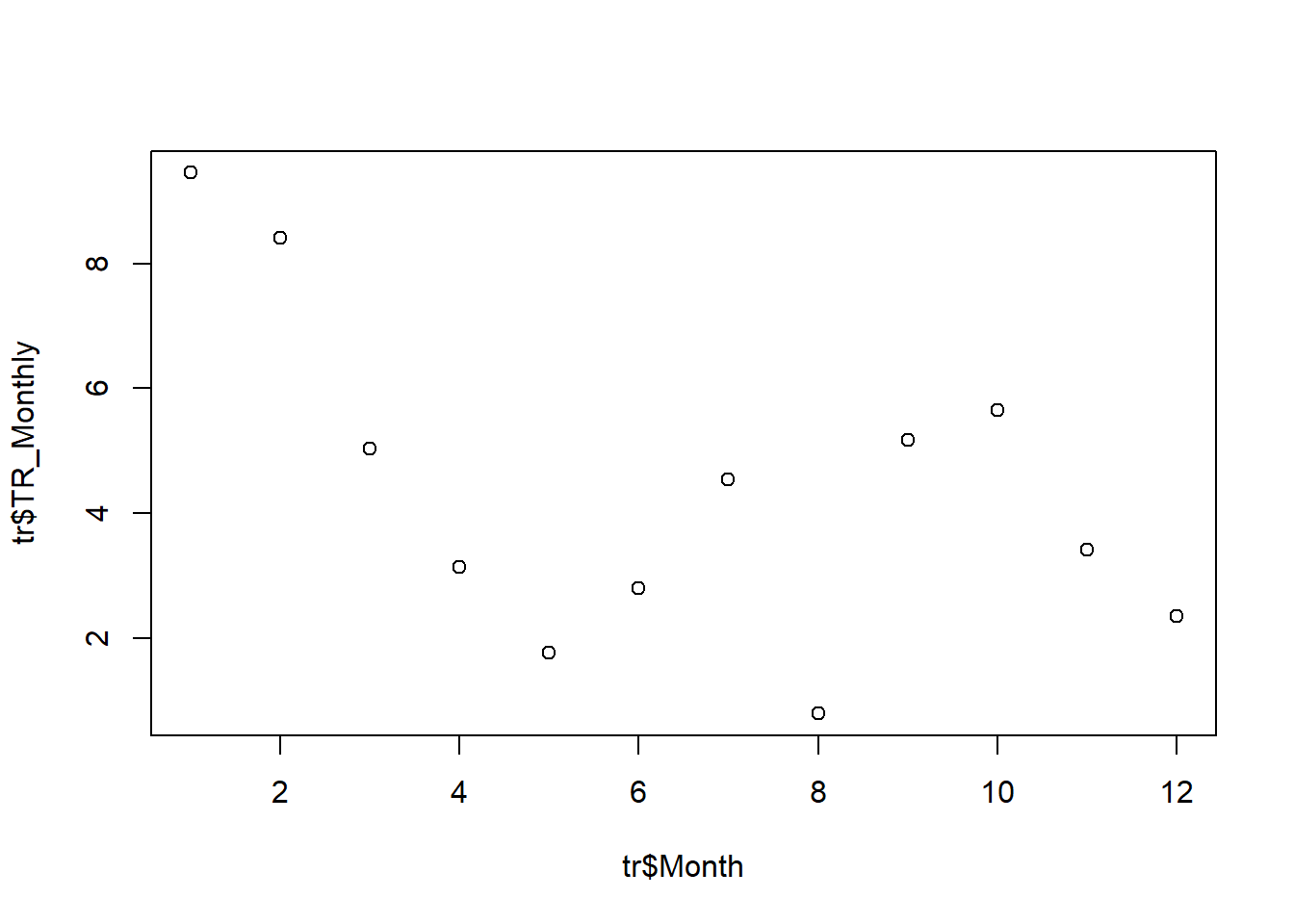 By default, the function as specified above provides us with scatter plot in our Plots window. If we wish to convert this plot to a line graph, we can add the following argument: type="l". 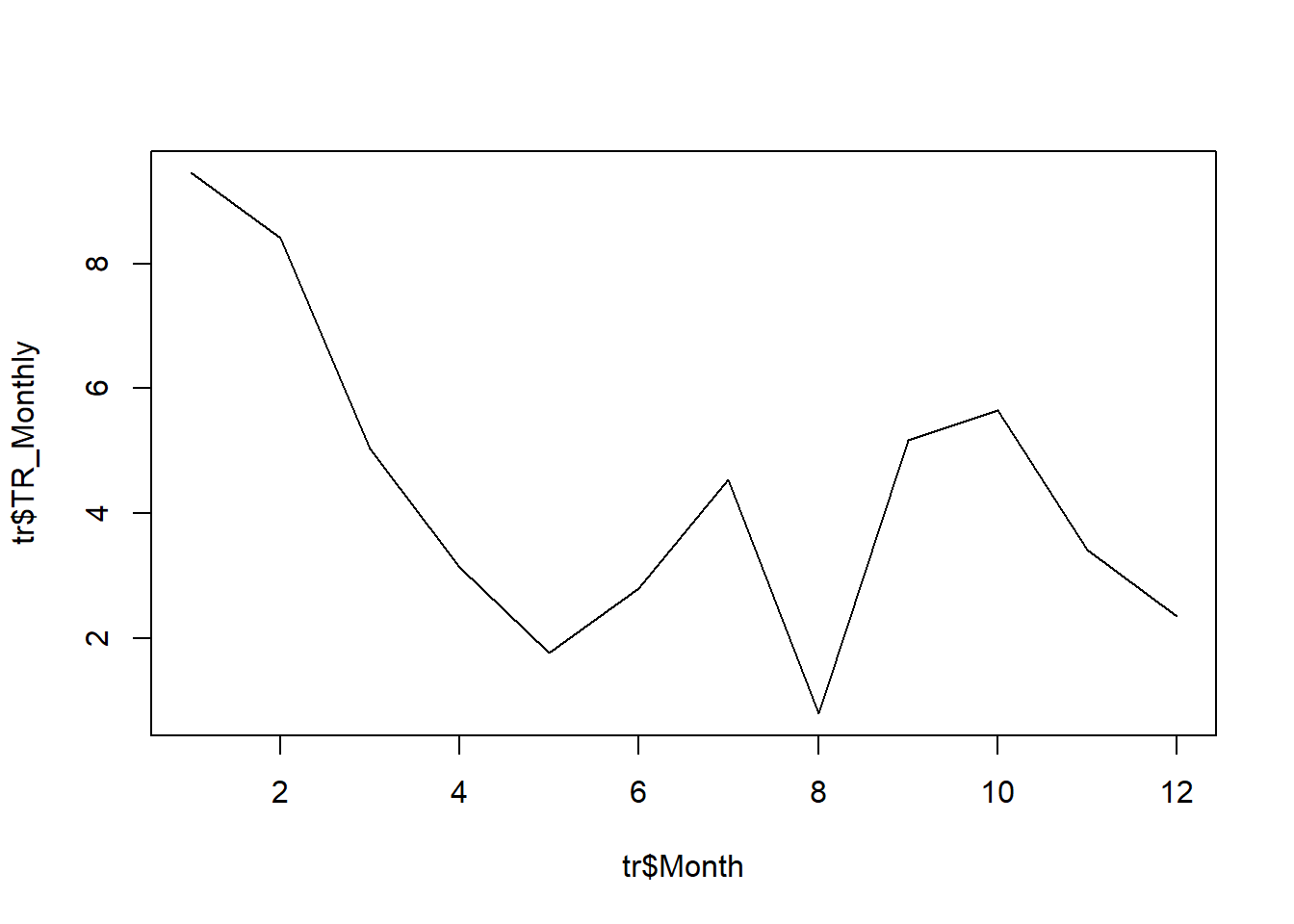 Next, we can create more meaningful x- and y-axis labels by using the xlab and ylab arguments. Note that anything we can write whatever we’d like in the quotation marks (" "). 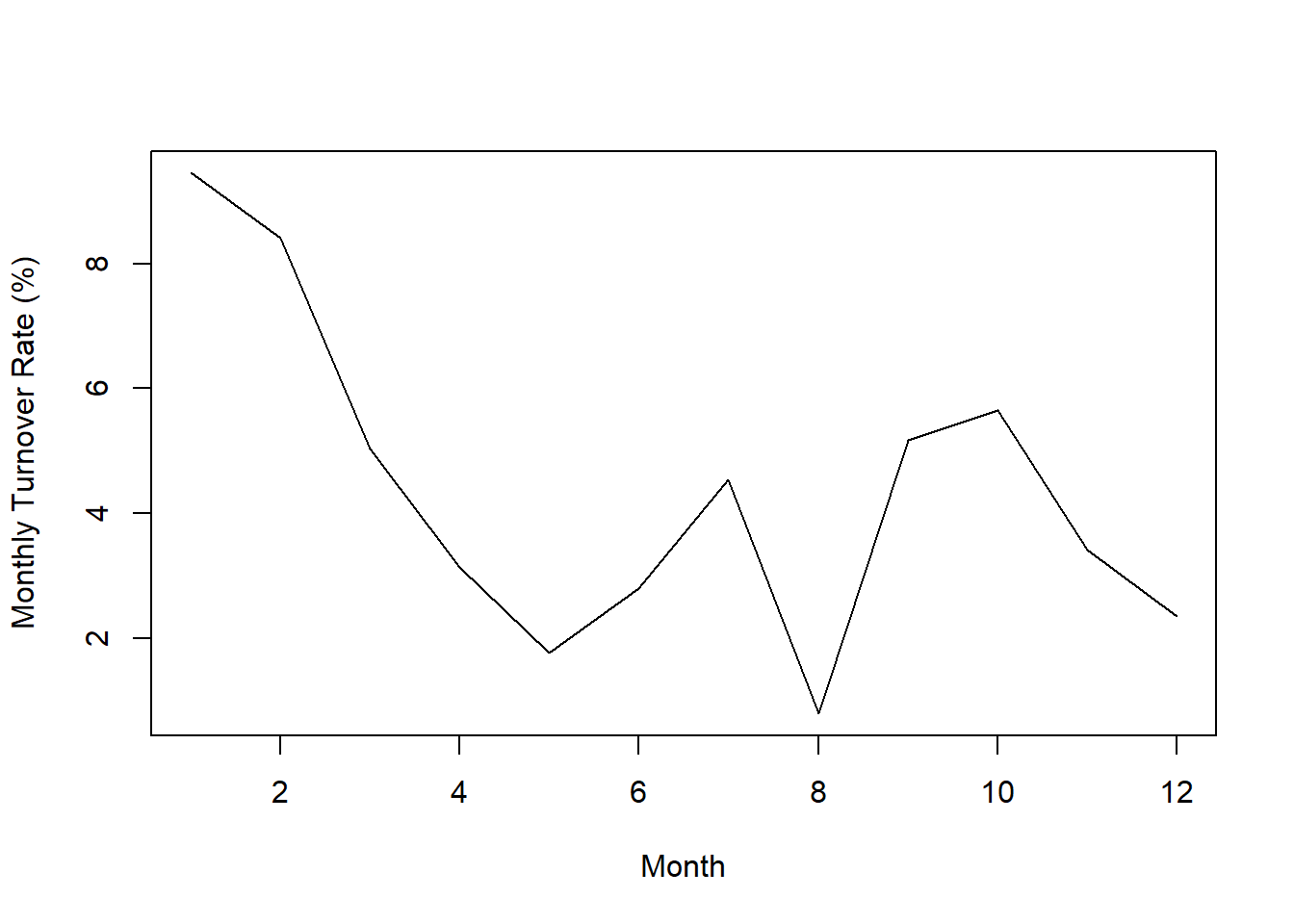 Finally, if we wish to adjust the y-axis limits, we can use the ylim argument followed by = and a vector of two values, where the first value is the lower limit of the y-axis and the second value is the upper limit. Here, we create a vector containing the lower- and upper-limits of 0 and 25 using the c (combine) function from base R. 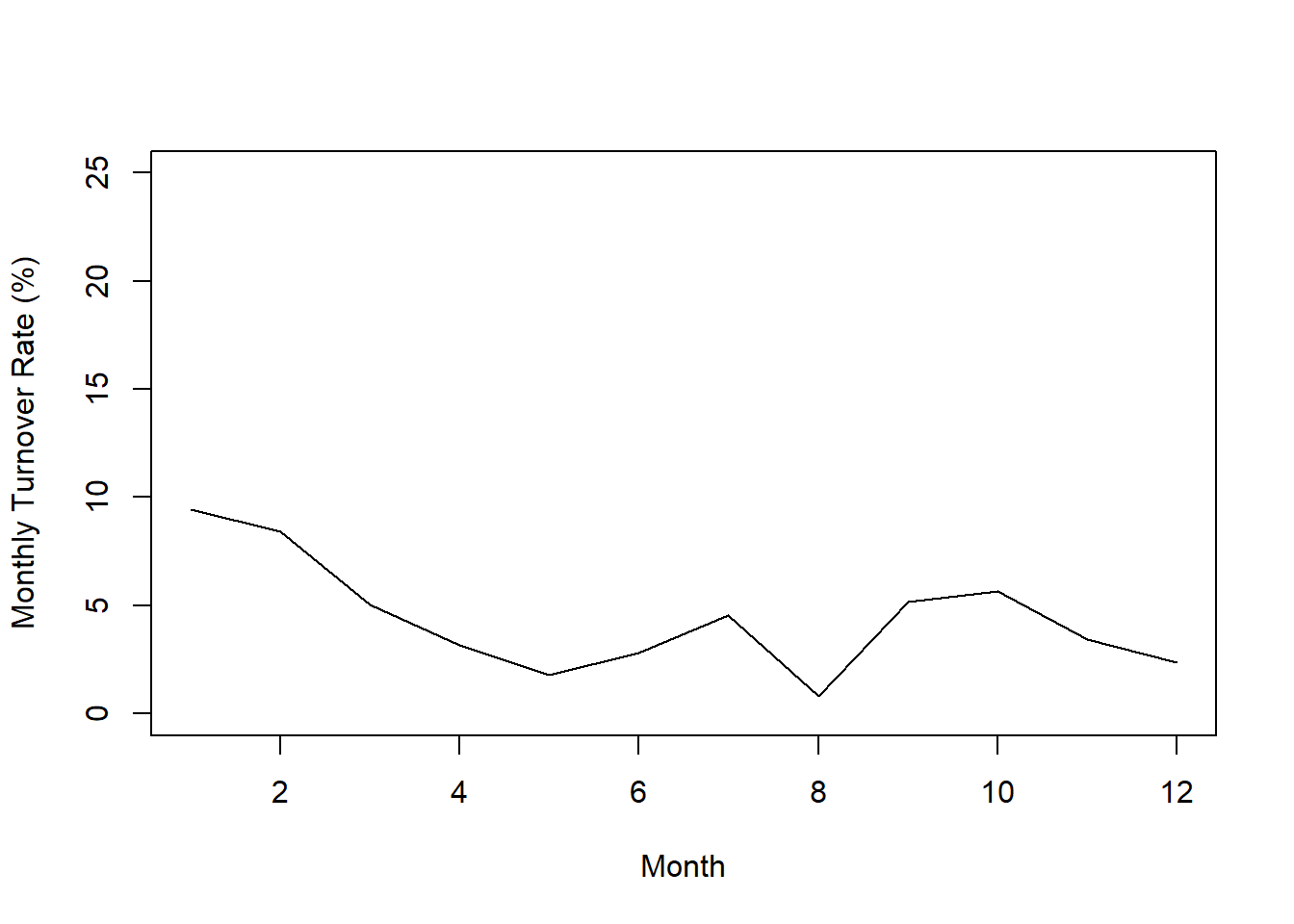 The resulting plot allows us to potentially identify and describe any trends or patterns in monthly turnover rates over the course of an entire year. Here, we can see that monthly turnover rates were highest in the first month (January) but then declined through the fifth month (May), increasing through the seventh month (July), dropping quickly to the eighth month (August), and then increasing, plateauing, and declining in the remaining months of the year. If we were to have access to data over multiple years, it’s possible we might begin to see some seasonality to the turnover rates. With access to more years worth of data, we could also build forecasting models (e.g., perform time-series analyses).

As a proportion, our annual turnover rate is approximately .5243. If we wish to convert this to a percentage, we can simply multiply our equation from above by 100.

After converting our annual turnover rate to a percentage, we see the value is approximately 52.43%.

Finally, if we wish to assign the annual turnover rate to an object that we can subsequently reference in other functions and operations, we simply apply the <- operator. Here, I’ve arbitrarily named this object TR_Annual.

We can print this object to our Console using the print function.

Like the monthly turnover rates, an annual turnover rate is typically evaluated by comparing it to prior years, comparing between units, or comparing to industry benchmarks.