Data analysis refers to the process of applying mathematical, statistical, and/or computational techniques to data to identify associations, differences or changes, or classes (categories), as well as to predict the likelihood of future events, values, or differences or changes. This phase draws upon the data that was acquired and managed during the Data Acquisition and Data Management phases, respectively, of the HR Analytics Project Life Cycle. In this chapter, we will review different data-analysis tools and techniques and the continuum of data analytics.

The Data Analysis phase of the Human Resource Analytics Project Life Cycle (HRAPLC) refers to the process of applying mathematical, statistical, and/or computational techniques to data to identify associations, differences or changes, or classes (categories), as well as to predict the likelihood of future events, values, or differences or changes.

A variety of tools and techniques can be used for data analysis, including:

With the exception of some forms of qualitative analysis, mathematics acts as the foundation for most data-analysis tools and techniques. Mathematics encompasses a broad array of topics ranging from basic arithmetic to algebra, geometry, and calculus. Even the application of arithmetic and simple counting to data can yield important and valuable insights. For example, a colleague of mine works as an executive coach and shared the following anecdote about a client who was the CEO of a small business. This CEO expressed concern about spending an inordinate amount of time in meetings. In response, my colleague asked how the CEO: “How much time do you spend in meetings each week?” The CEO responded: “I don’t know. How can figure that out?” Finding the answer to the question ended up being relatively straightforward. My colleague asked if the CEO to share their work calendar for the past four weeks, and together they counted up the total number of hours the CEO spent in meetings over the four-week period and then divided by four to compute the weekly average. The issue wasn’t that the CEO was unfamiliar with basic counting and arithmetic; rather, the CEO had never considered that useful data might be acquired from a work calendar and then analyzed using simple math. To me, this anecdote serves as a reminder that even simple forms of data analysis that we learned in primary school can yield valuable insights. Of course, the world of mathematics extends well beyond basic arithmetic to other more-advanced areas like geometry, algebra, and calculus.

When we think of data analysis in the context of HR analytics, we often focus on statistics, and thus we’ll spend a bit more time addressing this type of data analysis. Statistics is a branch of applied mathematics used to describe or infer something about a population, where a population could be, for example, all of the employees in an organization. In general, we can differentiate between descriptive and inferential statistics.

Descriptive statistics are used to describe the characteristics of a sample drawn from a population; often, when dealing with data about human beings in organizations, it’s not feasible to attain data for the entire population, so instead we settle for what is hopefully a representative sample of individuals from the focal population. Common types of descriptive statistics include counts (i.e., frequencies), measures of central tendency (e.g., mean, median, mode), and measures of dispersion (e.g., variance, standard deviation, interquartile range). When we analyze employee demographic data, for example, we often compute descriptive statistics like the number of employees who identify with each race/ethnicity category or the average employee age and standard deviation. It’s important to remember that descriptive statistics are, well, descriptive. That is, they help us describe characteristics of a sample, but when computed with data from a sample, they don’t allow us to make inferences about the underlying population from which the sample was drawn.

In contrast, we apply inferential statistics when we wish to make inferences about a particular population based on a sample of data we have collected from that population. A common approach to making these inferences is the application of null hypothesis significance testing (NHST). If you’re familiar with p-values, then you may also be familiar with NHST. For example, in the HR context, we commonly pilot new training programs with a sample of employees and collect outcome data, and then apply an inferential statistical analysis (e.g., independent-samples t-test) to infer whether the new training program will result in better outcomes than the older training program if applied to the overall population of employees.

Machine learning allows us to extend mathematical and statistical analysis of data - often to very large amounts of data. Specifically, machine learning is form of artificial intelligence in which data are statistically analyzed in ways that allow the “machine” to “learn” when presented with new data (for a brief yet broad overview, see Jordan and Mitchell 2015). Machine-learning algorithms (i.e., models) are often developed for the purposes of making more accurate predictions or classifications – or for finding patterns. For example, an HR data analyst might train, test, and validate a model aimed at accurately predicting who is at-risk for leaving the organization within a given time period. These algorithms can also be applied more broadly to automate processes and systems, with a famous example being how spam emails are detected and assigned to a spam folder (Guzella and Caminhas 2009; Gan 2018).

Let’s distinguish between two types of machine learning: supervised and unsupervised (Oswald and Putka 2016). In supervised learning, the model is trained, tested, and validated on data with labeled variables and with particular types of patterns, predictions, or classifications specified (e.g., decision tree, Lasso regression). In contrast, in unsupervised learning, variables are unlabeled, and structures, patterns, or clusters are inferred from the data, making this type of machine learning more exploratory in nature (e.g., K-means).

To understand and predict how complex systems behave, we can apply computational modeling and simulations. These tools are particularly useful in contexts in which it might be impractical, difficult (e.g., expensive, resource-intensive), or just not feasible to acquire and analyze real data (for a brief yet broad overview, see Calder et al. 2018). For example, employee interactions are complex and dynamic, and although technologies like sociometric badges enable us to monitor and surveil employee interactions in a mostly unobtrusive manner, such technologies may not be able to capture the specific type of interaction we’re interested in – and they may pose ethical and legal issues. Further, some types of interactions and relationship building may take months – or even years – to emerge, and it may not be practical to wait that long. To address these limitations and concerns, a tool like agent-based modeling (Bonabeau 2002; Smith and Conrey 2007) would allow us to specify evidence-informed characteristics and interaction decision rules (i.e., parameters) for each employee (i.e., agent) within a multi-employee system and to then observe that simulated system over a period of time. About a decade ago, I developed an agent-based model to simulate how employee emotional contagion and aggressive behavior propagate through a social network, which allowed me to understand how different social-network structures might affect the spread of emotion and aggressive behavior. In some sense, these types of simulations allow use to ask and answer “what if” questions.

Other prominent examples of computational modeling and simulations include dynamical systems modeling and Monte Carlo methods, and the data generated by computational models can also be analyzed using the aforementioned data-analysis tools and techniques. Like any modeling technique, computational models are not without their limitations. For starters, the omission of relevant parameters will influence how closely the model approximates reality, and such models may fail to account for real-world unanticipated shocks to a system. Still, computation modeling can be a useful tool for helping us to test theory and to project what can or will happen in the future in complex systems.

Descriptive analytics involves analyzing past data and describing what has happened in the past.

Predict-ish analytics involves analyzing past data and building a predictive model but stopping short of testing or validating that model with a new sample of data.

Predictive analytics involves estimating a model based on past data, and then applying that model to new data in order to evaluate the accuracy of the model’s predictions.

To illustrate how prescriptive analytics might work in practice, let’s continue with the hypothetical example that I provided for predictive analytics (see above). As a reminder, the model was focused on predicting who would voluntarily turnover based on engagement and task performance scores. Because the model predicted who would quit and how would stay with 85% accuracy, the HR analyst prescribed the following actions: 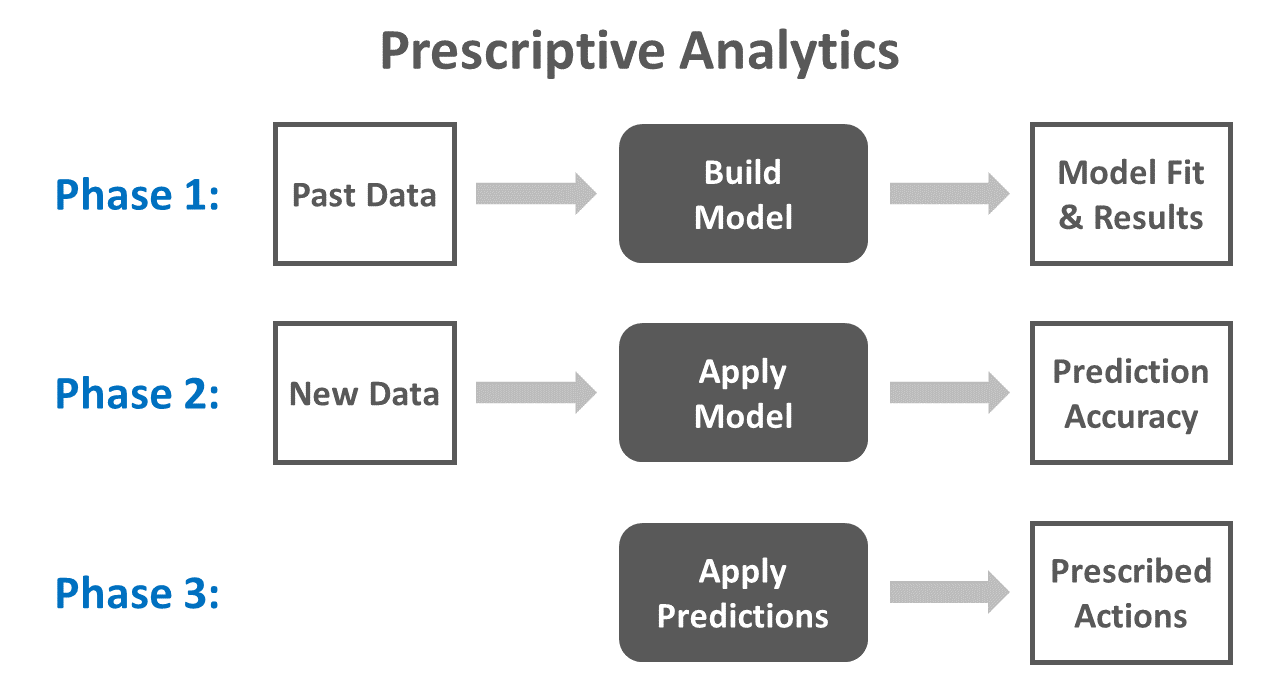