In this section, we’ll begin by reviewing the concept of criterion-related validity and then conclude by reviewing the Pearson product-moment correlation. With respect to the latter, we’ll discuss the statistical assumptions that should be satisfied prior to estimating and interpreting a correlation as well as statistical significance and and practical significance in the context of correlation. The section will wrap up with a sample-write up of a correlation when used to estimate the criterion-related validity of a selection tool.

A correlation represents the sign (i.e., direction) and magnitude (i.e., strength) of an association between two variables. There are different types of correlations we can estimate, and their appropriateness will depend on the measurement scales of the two variables. For instance, the Pearson product-moment correlation is used when both variables are continuous (i.e., have interval or ratio measurement scale), whereas the biserial correlation is used when one variable is continuous and the other is dichotomous (e.g., has a nominal measurement scale with just two levels or categories). In this chapter, we will focus on estimating Pearson product-moment correlations, which I will henceforth refer to as just “correlation.”

The statistical assumptions that should be met prior to running and/or interpreting a Pearson product-moment correlation include:

where \(r\) refers to the estimated correlation coefficient and \(N\) refers to the sample size. Alternatively, the exact p-value can be computed using a statistical software program like R if we know the df and t-value.

The size of a correlation coefficient can be described using qualitative labels, such as small, medium, and large. The quantitative values tied to such qualitative labels of magnitude should really be treated as context specific; with that said, there are some very general rules we can apply when interpreting the magnitude of correlation coefficients, which are presented in the table below (Cohen 1992). Please note that the r values in the table are absolute values, which means, for example, that correlation coefficients of .50 and -.50 would both have the same absolute value and thus would both be considered large.

A bivariate scatter plot comes in handy when visually depicting the direction and strength of an association between two continuous (interval or ratio measurement scale) variables. Further, the scatter plot can be applied to understand whether statistical assumptions related to linearity and a bivariate normal distribution have been met. To create examples of scatter plots based on simulated data, check out this free tool. The tool also does a nice job of depicting the concept of shared variance in the context of correlation (i.e., coefficient of determination) using a Venn diagram.

Note: If the p-value were equal to or greater than our alpha level (e.g., .05, two-tailed), then we would typically state that the association between the two variables is not statistically significant, and we would not proceed forward with interpreting the effect size (i.e., level of practical significance) because the test of statistical significance indicates that it is very unlikely based on our sample that a true association between these two variables exists in the population.

This chapter’s tutorial demonstrates how to estimate criterion-related validity using a correlation, and how to present the results in writing.

As usual, you have the choice to follow along with the written tutorial in this chapter or to watch the video tutorial below.

If you haven’t already, save the file called “SelectionData.csv” into a folder that you will subsequently set as your working directory. Your working directory will likely be different than the one shown below (i.e., "H:/RWorkshop"). As a reminder, you can access all of the data files referenced in this book by downloading them as a compressed (zipped) folder from the my GitHub site: https://github.com/davidcaughlin/R-Tutorial-Data-Files; once you’ve followed the link to GitHub, just click “Code” (or “Download”) followed by “Download ZIP”, which will download all of the data files referenced in this book. For the sake of parsimony, I recommend downloading all of the data files into the same folder on your computer, which will allow you to set that same folder as your working directory for each of the chapters in this book.

Next, read in the .csv data file called “SelectionData.csv” using your choice of read function. In this example, I use the read_csv function from the readr package (Wickham, Hester, and Bryan 2022). If you choose to use the read_csv function, be sure that you have installed and accessed the readr package using the install.packages and library functions. Note: You don’t need to install a package every time you wish to access it; in general, I would recommend updating a package installation once ever 1-3 months. For refreshers on installing packages and reading data into R, please refer to Packages and Reading Data into R.

The data frame contains 4 variables and 163 cases (i.e., employees): EmployeeID, Conscientiousness, Interview, and Performance. Let’s assume that these data were collected as part of a concurrent validation study aimed at estimating the criterion-related validity of selection tools (e.g., procedures, assessments, tests); this means that the selection tools (i.e., Conscientiousness, Interview) were administered to job incumbents and the criterion measure (Performance) was administered at about the same time. To begin, EmployeeID is the unique identifier variable. The Conscientiousness variable contains the scores on a personality test designed to “tap into” the psychological concept of conscientiousness; potential scores on this variable could range from 1 (low conscientiousness) to 5 (high conscientiousness). The Interview variable contains the scores for a structured interview designed to assess interviewees’ level customer-service knowledge and skills; potential scores on this variable could range from 1 (poor customer service) to 5 (strong customer service). Finally, the criterion for this concurrent validation study is the Performance variable, which contains the job performance evaluation ratings for the job incumbents; potential scores on this variable could range from 1 (does not meet performance standards) to 5 (exceeds performance standards).

The ScatterPlot function from the lessR package (Gerbing, Business, and University 2021) does a nice job generate generating scatter plots – and it even provides an estimate of the correlation by default. If you haven’t already, install and access the lessR package.

To begin, type the name of the ScatterPlot function. As the first two arguments of the function, type the names of the two variables you wish to visualize; let’s start by visualizing the association between the Conscientiousness selection tool and the criterion (Performance). The variable name that we type after the x= argument will set the x-axis, and the variable name that we type after the y= argument will set the y-axis. Conventionally, we place the criterion variable on the y-axis, as it is the outcome. As the third argument, use the data= argument to provide the name of the data frame to which the two variables belong (df).

In our plot window, we can see a fairly clear positive linear trend between Conscientiousness and Performance, which provides us with some evidence that the assumption of a linear association has been satisfied. Furthermore, the distribution is ellipse-shaped, which gives us some evidence that the underlying distribution between the two variables is likely bivariate normal – thereby satisfying the second assumption mentioned above. Note that the ScatterPlot function automatically provides an estimate of a (Pearson product-moment) correlation in the output (r = .509), along with the associated p-value (p < .001).

If you would like to optionally stylize your scatter plot, we can use the xlab= and ylab= arguments to change the default names of the x-axis and y-axis, respectively. 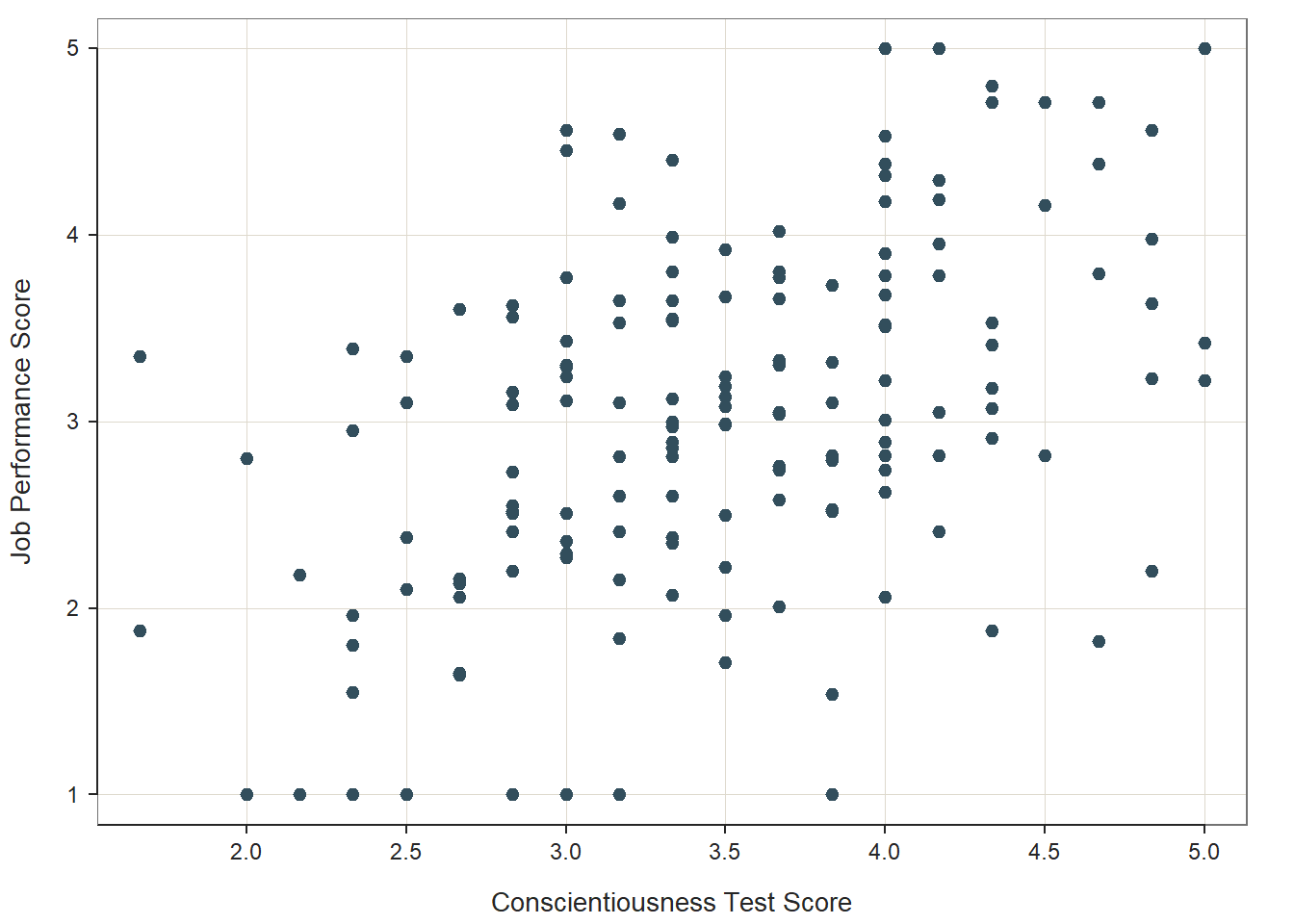 We can also superimpose an ellipse by adding the argument ellipse=TRUE, which can visually aid our judgument on whether the distribution is bivariate normal. 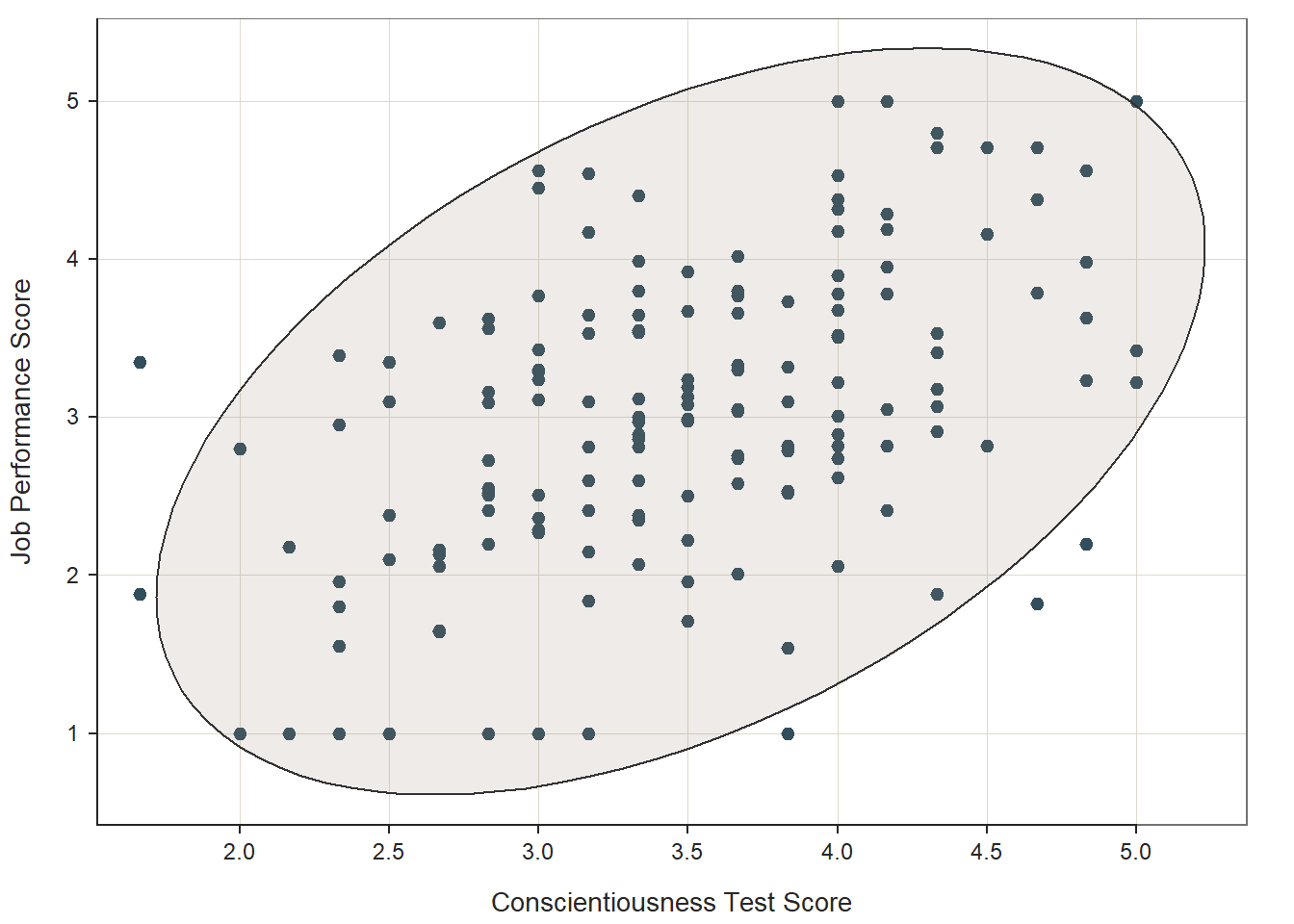 Important note: For space considerations, we will assume that the variables we wish to correlate have met the necessary statistical assumptions (see Statistical Assumptions section). For instance, we will assume that employees in this sample were randomly drawn from the underlying population of employees, that there is evidence of univariate and bivariate normal distributions for the variables in question, that the data are free of outliers, and that the association between variables is linear. To learn how to create a histogram or VBS plot (violin-box-scatter plot) to estimate the shape of the univariate distribution for each variable and to flag any potential univariate outliers, which can be used to assess the assumptions of univariate normal distribution and absence of univariate outliers, check out the chapter called Descriptive Statistics.

There are different functions we could use to estimate a Pearson product-moment correlation between two variables (or a biserial correlation). In this chapter, I will demonstrate how to use the Correlation function from the lessR package.

If you haven’t already, install and access the lessR package using the install.packages and library functions, respectively (see above).

To begin, type the name of the Correlation function from the lessR package. As the first two arguments of the function, type the names of the two variables you wish to visualize; let’s start by visualizing the association between the Conscientiousness selection tool and the criterion (Performance). Conventionally, the variable name that appears after the x= argument is our predictor (e.g., selection tool), and the variable name that appears after the y= argument is our criterion (e.g., job performance). As the third argument, use the data= argument to provide the name of the data frame to which the two variables belong (df).

In addition to the Correlation function from the lessR package covered above, we can use the cor and cor.test functions from base R to estimate a correlation. Because this function comes from base R, we do not need to install and access an additional package.

If required, please refer to the Initial Steps section from this chapter for more information on these initial steps.

The cor function from base R is a quick-and-easy approach to estimating a correlation coefficient if you’re only interested in the sign and magnitude (and not the significance level).

To estimate the correlation coefficient and associated p-value (along with the confidence interval), we can use the cor.test function from base R. By default, the alpha level is set to .05 (two-tailed), and thus a 95% confidence interval is used. As another default, the alternative/research hypothesis is that the true (population) correlation is not equal to zero. If wish to use these defaults, which would be most consistent with common practice. We can use the exact same three arguments as we used for the cor function above.